Paparazzi and fans managed to film Rihanna and A$AP Rocky while working on their joint music video. The artists are now in New York, where, to the delight of the public, often appear together.

The couple is filming a new music video in the Bronx. Other details about the upcoming project are not yet available. Yesterday, paparazzi managed to shoot a couple on the set. One of the locations was a balcony on a fire escape. Rihanna and A$AP Rocky were chatting and smiling for photographers. For the shoot, the singer wore a pink coat from the Louis Vuitton men’s collection, shorts, a bandeau and Amina Muaddi heeled flip-flops. The rapper posed in an acid-colored fur hat with earflaps.

The pair were also spotted in another location: the artists were filmed right in the middle of the street, walking and talking, while fans screamed in the background. Rihanna was wearing a long Loewe sheepskin coat and a corset from Dolce & Gabbana’s archival 2005 collection. 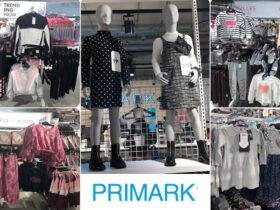